Whether your chimney is crumbling from moisture damage or old age, it’s a significant problem that must be addressed. Two solutions to a damaged and crumbling chimney are repointing and rebuilding. Chimney masonry services can bring your chimney back into tip-top shape and save you from major headaches down the road. So, what’s the difference between chimney rebuilding and chimney repointing?

The chimney is constructed with motor joints to keep the structure in place. As years go by, the mortar joints can begin to decay and create voids in areas of your chimney such as in between the bricks. This is typically the result of exposure to the elements, including the freeze and thaw cycle during brutal Boston winters.

If your chimney’s brick are in good shape, repointing might be the best option for you. This option helps repair the appearance, as well as, the structure of your chimney. It also prevents further damage and moisture from entering between the bricks. This is what can ultimately lead to your chimney experiencing major structural damage to the point where it needs rebuilding. 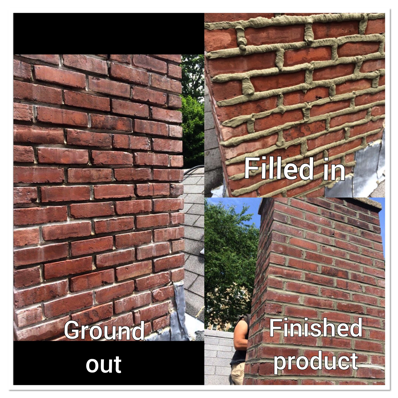 The process of repointing involves grinding out the mortar joints between the brick within by ¼” to ½”. The joints are then filled back in with new mortar and the excess is removed for a smooth and beautiful new look for your chimney!

There are some circumstances where a chimney’s repair goes beyond repointing. Rebuilding a chimney is often the result of years of neglect. The chimney can be unsafe to use until it is rebuilt.

There are several types of chimney rebuilding:

The good news is that you can avoid the need of rebuilding or repointing your chimney by working with professionals. Yearly chimney sweeps and inspections ensure that your chimney is properly performing and its structure isn’t compromised.

Boston’s Best Chimney has served the Boston area for 30 years with state-of-the-art chimney cleaning and masonry services. If you’re unsure if your chimney needs repointing, rebuilding, or some other type of repair, our professional team can guide you in the right direction. Contact us to discuss these services and more.