How Does a Chimney Work? 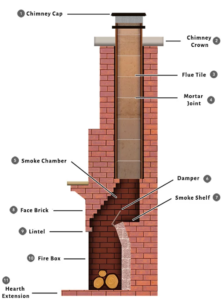 Chimneys are needed for not only fireplaces, but also for anything that burns coal, oil, wood, or gas. A chimney’s purpose is to remove carbon dioxide and other byproduct gases from the air. Having a chimney that properly works is essential to your safety. The Chimney Safety Institute of America recommends having your chimney, fireplace, and vents inspected at least once a year. If you suspect that your chimney has issues, or if you have not had it inspected in the past year, contact us here or call us at (781) 893-6611.

Why Understanding Your Chimney Matters

Knowing about the different parts of your chimney and their functions will help you to identify problems and be more aware of potential safety hazards. It’s essential to have your chimney inspected by an expert on a yearly basis, however, as professionals have the expertise and equipment to fully inspect your chimney which will help keep your home safe and efficient. To understand how a chimney works, it’s helpful to look at each part of a chimney and its function.

Anatomy of a Chimney

Having your chimney’s bricks in good condition ensures the structural integrity and efficiency of the whole chimney. Also, if the bricks are in poor condition, it is likely that moisture will seep through, which can cause mold or mildew growth and overall damage. 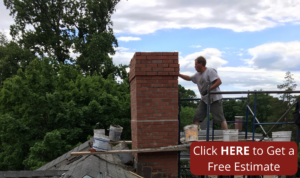 Essentially, a chimney cap is a hat that covers a chimney to protect it against precipitation and debris such as leaves and branches. Chimney caps often have mesh around them which prevents animals such as birds and squirrels from entering your chimney. This mesh can also help protect your home from fires because it functions like a spark guard. 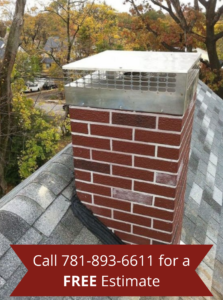 At Boston’s Best Chimney, we install aluminum, stainless steel, and polypropylene (PVC) chimney liners. Flue liners not only protect from heat transfer from your fireplace, they contain the flue gasses given off by your heating equipment and carry them up and out.. When there are cracks in your liner, it is essential to have your chimney liner replaced right away before using your  chimney again.

Before smoke enters the chimney flue, it goes through the smoke chamber. This area has slanted walls to make it easier for smoke to get to the flue. The smoke chamber also has a smoke shelf which serves to gather moisture and debris that can enter from outside.

Chimney flashing is found at the point where the chimney meets the roof. It can be made of aluminum, copper, steel, or  lead. It is important that chimney flashing is in good condition, because it protects your chimney, roof, and the rooms below it from moisture. 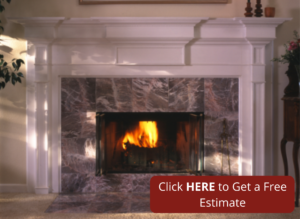 Most importantly, the hearth and the firebox are the parts of your fireplace where a fire is created. The hearth is the floor of the fireplace, while the firebox is where the fire burns.

Understanding how your chimney works will help you to keep up with regular inspections and maintain a safe, efficient, and aesthetically pleasing chimney in your home. If you suspect that your chimney has an issue or if you have not had it inspected within the last year, give us a call at (781) 893-6611 or click here to get in touch.

The post How Does a Chimney Work? appeared first on Boston's Best Chimney.