How to Tell if Your Chimney Needs to be Swept

There’s nothing like sitting around your fireplace in the winter, feeling warm and cozy. But then it crosses your mind, when was the last time you’ve had the chimney inspected and swept?  The chimney needs to be cleaned out periodically to get the most out of your fireplace, but most importantly, safe operation.

Well, what happens if you don’t sweep your chimney?

If you don’t get routine inspections and sweepings for your chimney, you are putting yourself at risk of chimney fires and carbon monoxide poisoning. The build-up of soot, creosote, and tar can block fumes from escaping and can ignite a fire. 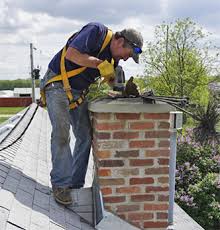 HERE ARE OUR TOP 8 SIGNS THAT YOUR CHIMNEY NEEDS TO BE CLEANED:

1. Oily Spots on the Walls of Your Fireplace

The black, oily spots on the walls of your fireplace are a tar-like substance called creosote. This substance can build up all the way to the top of your chimney and can cause restricted airflow. Poor airflow increases the amount of time smoke and flue gasses remain in the flue accelerating build-up.

If you have difficulty starting fires in your fireplace, it could be because the chimney is clogged or there is a malfunction with the fireplace damper. These issues can keep a fire from getting a sufficient supply of oxygen to burn properly.

3. Odors Coming from the Fireplace

Creosote has a campfire-like odor and can permeate around the house. In addition to the smell being a nuisance, it is also an indicator that the soot in your chimney has built-up to an unsafe level.

4. Animals Inside the Chimney

Animal nests can both block the airflow in your chimney and catch fire while burning wood in your fireplace. Bird nests are mostly found at the very top of your chimney, covering the vents. Squirrels are also known to make nests in chimneys.

5. Smoke Doesn’t Rise Up the Chimney

If you notice that smoke doesn’t rise up the chimney like it used to, it may be time to clean your chimney. There should be airflow up the chimney, but a layer of creosote can stop up the works.

6. Fires are Difficult to Maintain

Fires need oxygen, but a dirty chimney can make it hard for your wood to get the air it needs to get going.

7. Chimney Soot is Falling from the Chimney

If you have chunks of chimney soot or creosote falling on your wood from the chimney, then that’s a good sign that you have creosote build-up problem, and the chimney needs to be cleaned.

If you notice that your hand turns black when you open the damper, then it’s time to have your chimney swept.

These signs are relatively easy to spot but taking steps to ensure your home is safe from the risk of fire damage is the next step.

Please schedule your chimney inspection and cleaning now to beat the spring rush!

The post How to Tell if Your Chimney Needs to be Swept appeared first on Boston's Best Chimney.