With Spring Comes April Showers: Is It Normal for Rain to Come Down My Chimney?

Just when we start to feel the relief of winter being behind us, we are faced with often rainy Springs. Many New Englanders love the change of season, and each one does bring its own set of joys and challenges.

If you’ve been hearing a dripping sound coming from your chimney after a heavy rain or noticed moisture and stains on the wall near your fireplace, you likely have an issue, and it should explored further.

It is very common for chimney systems to have leaks, and it is imperative to stay on top of this. If a suspected leak is not addressed, it can lead to much more significant damage.

Further, if your home was built before 1970, and you haven’t had any preventative maintenance on your chimney’s masonry yet, it’s probably time to think about it. Chimney leaks that go unnoticed lead to potential hazards and costly repairs if not addressed early on.

The chimney is a much more complicated structure than most people realize. For this reason, pinpointing the exact source of the leak can be challenging. 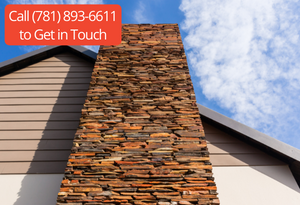 How Does Water get Into My Chimney and What Are the Dangers of It?

Water is the mortal enemy of a chimney. If rainwater penetrates the chimney, the materials that make up the structure can deteriorate rapidly. Chimneys are regularly exposed to severe, changing weather conditions like heavy rain, wind, and snow. Over time, these elements can create cracks in the system, leaving the chimney more susceptible to damage from water and moisture.

A leaky chimney can lead to moisture damage, and left untreated, cause bricks to collapse into the chimney resulting in an obstruction.

If your chimney becomes clogged, you may experience airflow problems that affect the heat and hot water in your system. An even bigger concern is that a clogged chimney can cause dangerous carbon monoxide leaks in your home that put you and your family at risk.

How Does Rain Get Into the Chimney?

There are several issues that may cause leaks in your chimney system, including:

The chimney crown is the first line of defense from harsh weather conditions. It covers the top of the chimney and slopes downward to accommodate water runoff. The chimney crown also keeps water from getting into the flue, while preventing the masonry from experiencing further damage due to deterioration.  A chimney that has a damaged or missing crown is vulnerable to damage from the water issues that arise from storms and heavy rainfall.

Chimney relining helps reenforce the structure of your chimney and deters water from entering through holes and cracks. The chimney relining process involves inserting a stainless-steel sleeve or coating the interior portion of the chimney cavity with Cerfractory sealant.

Constant exposure to the weather elements affects the chimney’s ability to prevent water penetration.   Hey, it happens to the best of us as we age.  A waterproofing application is a less expensive yet effective way to prolong the life of the chimney structure. 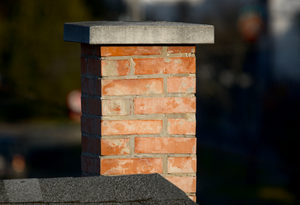 Gaps between the roof and chimney are a standard culprit for water leaks.  Applying an elastomeric sealant or replacing the lead flashing rules out this entry point

What Should You Do If You Suspect a Leaky Chimney?

A leaky chimney should be evaluated and repaired. Because there could be multiple areas of the chimney that have been damaged by rainwater, an inspection or water test may be needed to try to determine the entry location.

Schedule your chimney inspection today or call us at 781-893-6611 to discuss your concerns.

The post With Spring Comes April Showers: Is It Normal for Rain to Come Down My Chimney? appeared first on Boston's Best Chimney.