Do I Really Need A Chimney Cap?

A properly installed chimney cap is a must to prevent headaches down the road (and little critters running through your home). A chimney cap will prevent animals from entering your home, keep excess moisture out, and protect the roof from burning embers that could potentially start a house fire.

Even though a chimney cap is a minor and relatively inexpensive installation, many homeowners question whether it is necessary or not. The truth is that this small amount of metal protecting your chimney can prevent numerous mishaps from taking place and save a homeowner thousands of dollars in unnecessary chimney repair or damage expenses. 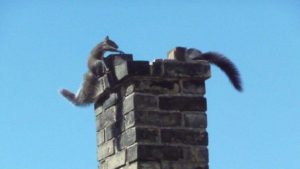 Keeps the Animals Away

During the cooler months, animals walking along your roof will feel the warmth around the chimney from the fire below. For this reason, they will make their nests close or inside the small and comforting space of the chimney flue. It doesn’t take long for an unwelcome family of critters to move into your chimney. Squirrels can create a 4-foot deep nest in less than 24 hours! Installing a simple chimney cap with mesh siding will prevent these animals from homesteading within your residence.

Bird and squirrel nests built in the open space of a flue will create obstructions blocking the path of smoke and flue gasses exhausting through the chimney. With large animal nests in the way, though, these harmful gases will end up backing up into the rooms of your home. This backup can cause smoke and soot damage and even carbon monoxide poisoning.

What Are the Effects of Moisture?

Rain, snow, and ice all create problems for your chimney if they are allowed in the chimney flue. Moisture causes deterioration problems within the structure, and when mixed with certain types of soot, it can become even more harmful to the inside structure of your chimney. The freezing and melting of ice and snow are especially hard on the masonry chimney walls, chimney crown, and chimney liner. This freeze and thaw cycle can cause severe problems, such as cracks in the structure during the winter months, which often leads to costly repairs. Therefore, it is best not to allow the excess moisture into the chimney in the first place by diverting the elements away from the chimney with a chimney cap that is properly sized for your chimney.

Why Protect Against Embers

Along with smoke, burning embers from the fire below can pass through the flue before they are extinguished. These burning ashes escape out of the top of the chimney and can start a fire on your roof. These problems are entirely avoidable with the addition of a chimney cap with spark guard to prevent the burning particles from escaping.

The post Do I Really Need A Chimney Cap? appeared first on Boston's Best Chimney.